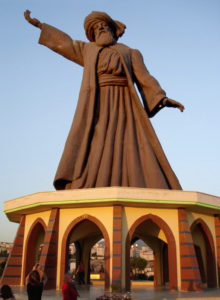 FAMOUS QUOTES FROM THE WORK OF RUMI. 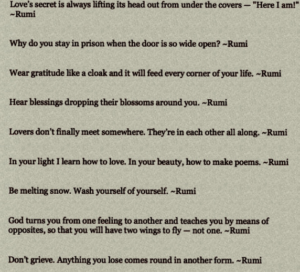 Sufi is the name given to a practitioner of Sufism.  Sufism is a branch of Islam.  Sufism is the mystical, inner dimension of Islam.  Sufi’s form congregations around a master for spiritual meetings.  They believe that they are practicing perfection of worship in the truest original form of Islam.  There are some differing definitions of Sufism within and without Islam, for example, it may be considered a science or a philosophy universal in nature predating the rise of Islam and Christianity.

Some meanings of the word Sufi are; (1) from the Arabic word ” safa” which means purity (2) Suf “wool” which refers to the simple wool cloak worn by the early Muslim ascetics and (3) the word Sufi is derived from the Greek word sofia meaning wisdom.  The basic ideal of the Mystic Sufi is to quell the ego, the self, and through loving ardor for God it is possible to maintain a union with the divine in which the human self melts away.

Jalal-al-Din is the Moslem name of the mystic known as Muhammad Rumi or as he is known in the West, Rumi.  He was born 1207 in a small village in what is now Tajikistan, to native Persian speaking parents.  In the East Rumi is known as Mevlana which means Master.  So revered is this master of words of inspiration, whose quotations and verses have come to us through many centuries that The United Nations declared 2007 The Year of Rumi and celebrations were held worldwide.

Rumi’s father was a brilliant Islamic scholar and fearing a Mongol invasion the family moved to Konya a part of the Turkish Empire. Rumi received his early education from his father, followed by the teachings of top scholars of the time. He was initiated into Sufism through which he pursued the divine truth and immersed his mind and soul into the pursuit of heavenly wisdom and inspiration.

Rumi married and had two sons with his first wife and when, years later she died, he married again and had another son and a daughter.  Although he was a Sufi and a great scholar of the Qu’ran he was noted for his cosmopolitan and tolerant outlook as he studied other religions with care and understanding.

The daily language of the time was Turkish, the scientific language was Arabic and Persian was the language of literature.  Rumi’s original books are all in Persian.

Later they were translated into Turkish.  Rumi’s best known book of verse, Masnawi, contains twenty six thousand couplets in six volumes.  In this book there are stories inspired by the teachings of the Qu’ran about all that is created as well as the moral teachings of Mohammad.  Couplets containing few words contain immense wisdom.  The beauty of his poetry transfixes the reader who may then examine the meaning to gain wisdom.  Rumi’s inspiring poetry covers different ideas but the intrinsic theme is the longing and searching for the union within the divine.

He uses unexpected imagery in his poetry such as ” drunk and intoxicated with ecstasy for his beloved”  in this meaning ” drunk” means bliss and overcoming the self as a means to the divine.  Rumi was a Dervish.  A Dervish  took a vow of poverty and begged so as to learn humility,  any gains had to be given to others.  The whirling dance associated with dervishes was performed to reach religious ecstasy.  In Turkey this is now used as a tourist attraction.  Rumi was a devout Muslim and his teaching of peace and tolerance has appealed to men and women of all sects and creeds from all parts of the world; Muslims, Jews, Christians and others.  Rumi is a point of unity for East and West.

There may be problems in life but Rumi teaches that no one can touch the core of an individual. The evolution of the Soul happens through growth and growth happens through struggle and past experiences.  So, welcome change.  The door for escape and expansion is there from our birth.  Choice exists.  Keep moving because the spark of evolution is timeless.  The open mind is the escape hatch so it is important not to get stuck .

Rumi tells us that we take the core of experiences with us through life, experience and growth is the purpose of life and this we must share.  We absorb love from others.  The journey of the Soul is to grow in the process and that spirituality is the lifestyle of those on the evolutionary path.

Rumi claims that the spiritual lifestyle has been turned into a system of control.  He tells us to welcome struggle but to rise above it.

Rumi tells us that God lives in our hearts…You are God.  Through the struggle of controlling the self and becoming one with God, Wisdom, love and peace evolve in the human heart and soul.

Translated from Persian by Coleman Barks with John Moyne.

This being human is a guesthouse.

Every morning a new arrival.

A joy, a depression, a meanness,

as an unexpected visitor.

Welcome and entertain them all!

Even if they’re a crowd of sorrows,

who violently sweep your house

empty of its furniture,

He may be clearing you out

for some new delight.

The dark thought, the shame, the malice,

meet them at the door laughing,

and invite them in.

Be grateful for whoever comes,

because each has been sent

as a guide from beyond.

A chickpea leaps almost over the rim of the pot

Where it’s being boiled.

‘Why are you doing this to me?’

The cook knocks him down with the ladle.

‘Don’t you try to jump out.

You think I’m torturing you.

so you can mix with spices and rice

and be the lovely vitality of a human being.

Remember when you drank rain in the garden.

That was for this.’

then a boiling new life begins,

and the Friend has something good to eat.

will say to the cook,

‘Boil me some more.

Hit me with the skimming spoon.

I can’t do this by myself.

back in Hindustan and doesn’t pay attention

to his driver. You’re my cook, my driver,

my way into existence. I love your cooking.’

fresh from the ground. Then I boiled in time,

and boiled in the body, two fierce boilings.

I controlled it with practices,

and boiled some more, and boiled

and became your teacher.’

Who Makes These Changes

Who makes these changes?

I shoot an arrow right.

I ride after a deer and find myself

chased by a hog.

I plot to get what I want

and end up in prison.

I dig pits to trap others

I should be suspicious

of what I want.

unable to say yes or no.

Then a stretcher will come

from grace to gather us up.

We are too dull-eyed to see the beauty.

If we say Yes we can, we’ll be lying.

that No will behead us

and shut tight our window into spirit.

So let us rather not be sure of anything,

beside ourselves, and only that, so

Crazed, lying in a zero-circle, mute,

we will be saying finally,

with tremendous eloquence , Lead us.

When we’ve totally surrendered to that beauty,